The desertification of the Eastern Cape

More than 1 million hectares of thicket vegetation in the Eastern Cape, South Africa have been degraded by goat farming over the past century. The change in the landscape is startling: a dense, virtually impenetrable forest is transformed by the goats into an open, desert-like landscape with a smattering of intensively pruned trees. This is desertification in its most extreme form. Soils are exposed to the impact of raindrops and rapidly erode, with entire topsoil horizons ending up in rivers and dams. The animals and plants of the forested environment are largely absent. The few trees that remain are the “living dead” because their seedlings cannot survive in the baking sun. The desertified landscape is a mere shadow of its former self. In wet years this human-induced desert is transformed into a lush green pasture of annual grasses and shrubs, and livestock thrives. But in dry years (which are common in the Eastern Cape), the land’s surface remains brown and pickings are slim for herbivores.

Rolling back the desert

Fortunately there is a practical way of rolling back the desert using the remarkable succulent tree Portulacaria afra (spekboom). This plant grows in abundance in many thicket types and grows to a height of 4 meters and more in certain areas. Furthermore, it can be grown from cuttings planted in either wet or dry soils. Farmers across the Eastern Cape have used spekboom cuttings to great effect for creating dense hedges in their gardens and in a few cases restoring large areas of the goat-degraded landscapes.

Spekboom is the centre-piece of AfriCarbon’s vision. Planting spekboom cuttings on a large scale, over tens or even hundreds of thousands of hectares, in goat-degraded thicket results in the rebuilding of carbon-rich topsoils. The considerable amount of carbon captured in the plant and the soils can be sold as carbon credits on local or international markets, making the planting operation not only financially viable, but more profitable than present agricultural uses for the land. Indeed, the more than 1 million hectares of degraded thicket represent a significant business opportunity for spekboom carbon farmers. As well as benefitting financially, by returning the dominant indigenous plant in the region (i.e. spekboom,) the carbon farmer is creating a cooler, more benign environment for other thicket plant species to establish. Over decades, the thicket and its fauna will return.

The knock-on benefits of thicket restoration

Thicket in its natural or restored state has significant benefits.

Landscapes restored with spekboom cuttings can potentially generate more than 10 carbon credits per hectare per year over a 30-year period. The cost of planting spekboom cuttings ranges from R12000 to R18000 per hectare, depending on the soil type and proximity to intact spekboom-rich thicket. Please note that these are the costs for planting only. Transaction costs involved in generating carbon credits (e.g. monitoring and evaluation, validation, certification, project development and baseline development) can be considerable, but income from carbon credits more than offsets these costs over the project lifetime. AfriCarbon has undertaken detailed financial modeling of a range of restoration scenarios. These scenarios can be discussed in greater detail with stakeholders interested in participating and investing in restoration projects.

How does spekboom defy the desert odds?

Spekboom grows remarkably quickly for the meagre rainfall that it receives. There are two proposed reasons why spekboom is able to buck the trend. Firstly, it is exceptionally succulent and can consequently store water after rainfall which it then uses during dry periods. The amount of water stored above ground in pristine spekboom-rich thicket is in the order of 200 cubic meters per hectare: this is equivalent to a shallow dam in the landscape concealed and protected by greenery. Secondly, spekboom has an unusual ability to “switch gears”; during dry periods it stores water like a cactus and grows slowly, but during wet periods it grows rapidly and behaves like a conventional tree.

Spekboom-rich thicket is home to a wide variety of large mammals, including black rhino, buffalo and elephant. Like most succulents, spekboom can take root from broken stems, which appears to work strongly in its favour in areas where these large mammals, as they have done for millennia, smash their way through dense spekboom stands, leaving a trail of broken branches in their wake. 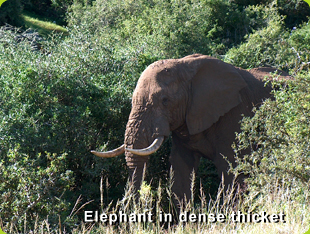 The potential financial returns from restoration with spekboom cuttings

Spekboom planting is an exceptionally cost-effective means of restoring thicket that was rich in spekboom before it was degraded. Provided the correct soil and landscape is selected, spekboom cuttings can be used, with minimal treatment, to revegetate degraded thicket landscapes. Furthermore, because of spekboom’s remarkable growth rate, the rate of carbon capture can rival tropical forests. The end result is that one tonne of carbon dioxide can be captured for less than one tenth of the cost of restoration projects in temperate or tropical forests. Based on a carbon credit selling price of >$10, the internal rates of return of a spekboom restoration project greater than 1000 hectares are calculated to exceed 15%. 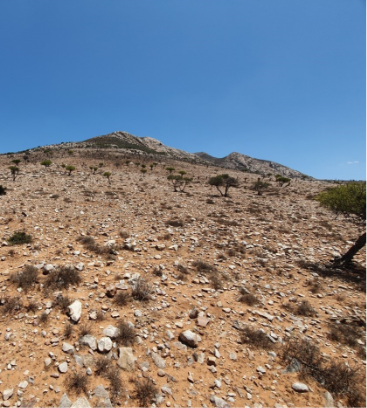 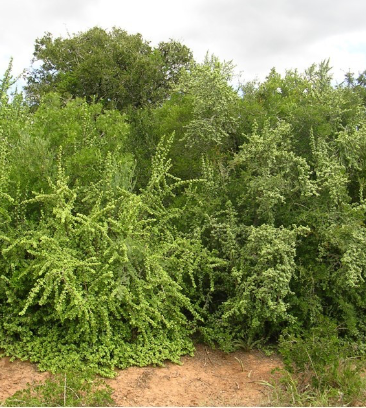